The Tongue is a Fire: The Importance of Striving for Purity of Speech 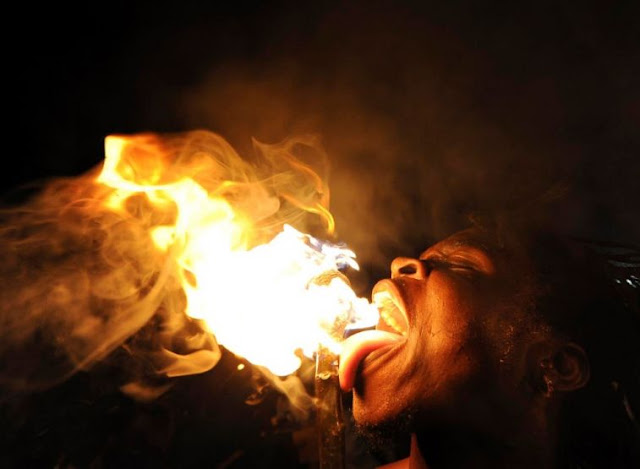 The Importance of Speech in Our Christian Faith

As Christians, speech and words are particularly meaningful to us for a variety of reasons. First of all (literally), we believe that God spoke all of Creation into being out of nothing: "For he spoke, and it came to be; he commanded, and it stood forth" (Psa 33:9). We believe that Jesus Christ is the Logos, that is, the Word of God: "In the beginning was the Word, and the Word was with God, and the Word was God" (Jn 1:1). We believe that Christ became incarnate at the moment when the Blessed Virgin Mary said, "Let it be done to me according to your word" (Lk 1:38). We believe that the Bible is the inspired Word of God. Due to the sacramental nature of the Catholic Faith, words are particularly meaningful to those of us who are Catholic Christians. Like other Christians, we believe that the words spoken at baptism are essential to the validity of the sacrament: "I baptize you in the name of the Father, and of the Son, and of the Holy Spirit." We believe that God works through human priests to forgive us of our sins in the Sacrament of Penance (Confession), using the words, "I absolve you of your sins in the name of the Father, and of the Son, and of the Holy Spirit." During the Mass, we believe that ordinary bread and wine are changed into the Body, Blood, Soul, and Divinity of Jesus Christ when the priest utters the words spoken by Christ at the Last Supper (Mt 26:26-28, Mk 14:22,24, Lk 22:19-20).

The Power of Speech

As human beings, we cannot speak things into existence out of nothing the way God can (which is probably a good thing). However, as creatures made in God's image and likeness, our speech does have creative power Like our actions, the words we speak are not only a reflection of our thoughts and inward disposition; they also have the power to change us, influence others, and praise and glorify God. Unfortunately, our speech doesn't always serve God, others, or ourselves in a positive way, but is at times destructive. Today, there is an epidemic of obscene language, profanity, gossip, hate speech, and abuse of the name of God. Sadly, these destructive acts of speech are often justified and even praised in the name of humor (one of our favorite idols). Personally, I used to be guilty of all these sins (especially profanity), and I still struggle with some of them on a regular basis. Having also noticed the prevalence of these problems among many other people as well, especially young people, I was moved to share my thoughts on this topic. Don't worry, I haven't forgot about Advent or Christmas––this topic has just been pressing my mind lately, and in fact, purifying our language is one way to make a beautiful gift of ourselves for Christ when He comes into our lives in a new way this Christmas.

Who shall ascend the hill of the Lord?
And who shall stand in his holy place?
He who has clean hands and a pure heart,
who does not lift up his soul to what is false,
and does not swear deceitfully.
He will receive blessing from the Lord,
and vindication from the God of his salvation (Psa 24:3-5)


"What comes out of the mouth proceeds from the heart, and this defiles a man. For out of the heart come evil thoughts, murder, adultery, fornication, theft, false witness, slander" (Mt 15:18-19).

It is tempting to believe that the way we speak does not affect how we view other people or change our attitude towards life. However, nothing in our experience supports this notion. The reality is that our speech is closely connected to our beliefs, moods, and attitudes. This connection is reciprocal, that is, the person we are now is revealed in part by the way we speak, and the way we speak has a powerful effect on the person we become. It is easy enough to admit this in theory, but in practice it is of course much more difficult. How often do we say things in arguments, in moments of frustration or anger, or in jest that tear others down and defile us? How often do we justify vulgarity, perversion, gossip, and verbally abusing others for the sake of laughter? I frequently hear statements such as, "That's sooo bad! But it's really funny!" and "I'm going straight to hell for saying that!" (usually followed by more laughter, as if going to hell is a joking matter). Jesus Himself said that we will be judged on our speech:

I don't know about you, but I find those words hard to read! Many people believe the modern lie that the morality of actions, including speech, is entirely dependent on the circumstances. This idea flows out of the pervasive moral relativism of our time, which Pope Emeritus Benedict XVI diagnosed as the most serious threat to our world. Regarding speech, this relativism is manifest in the belief that language itself is morally neutral, and that all ideas we have about certain types of speech being morally wrong are based entirely on whatever the prevailing social norms happen to be. I often people say things such as, "Don't say that around the kids!" This is blatant hypocrisy, for if we don't expect or demand pure and respectful speech from adults, then why are we so worried that children might imitate them? After all, aren't our children supposed to be imitating us? The use of profanity amongst young people is little more than a rite of passage into adulthood. The majority of parents actually expect teenagers to start using profanity and impure language, and simply give up trying to prevent such speech once their children have reached the "appropriate" age (whatever that means). The idea that there is an appropriate age for profane or impure speech makes any attempt to condemn such speech on moral grounds unconvincing. For if an age-based standard is justified, then adults should be more accountable for their speech, being more experienced and aware of their influence. Instead of embracing the current eroded standard of speech, we should set a higher standard for ourselves and model that standard to others. As Saint Paul wrote, "Do not be conformed to this world but be transformed by the renewal of your mind, that you may prove what is the will of God, what is good and acceptable and perfect" (Rmn 12:2). I'm not simply suggesting that it would be nice if we could "clean things up a little" when it comes to our speech. I'm pointing out that purity of speech is a necessary virtue for Christians and a practical step to overcoming the negativity, perversity, and growing lack of respect for human dignity that plagues our culture and world today.

Impart Grace to Others


Let no evil talk come out of your mouths, but only such as is good for edifying, as fits the occasion, that it may impart grace to those who hear (Eph 4:29).

As people of faith, we cannot be content with baseness and impurity of speech simply because it prevails in the world around us. Instead, we should recognize that setting ourselves apart from the rest of the world, both in belief and in practice, is essential to bearing witness to the "Joy of the Gospel," as Pope Francis has invited each of us to do. One of the first things people notice when they meet you, after your appearance and body language, is your speech. If they don't hear you swearing, cutting down others, or using impure language, they will think to themselves, "There's something different about this person." This difference, this set-apart-ness (when you study philosophy, you quickly discover that "-ness" can be added to any word), is attractive to people and even contagious. It shows others that you take yourself seriously, and that you not only recognize the great influence you have on other people, but that you care enough to speak in a manner that reflects this. As Christians, we should be striving to build others up by our words and actions. The more we allow profane, slanderous, and blasphemous language to become part of our speech, the less effective we will be in this endeavor. If the words we use and the conversations we have contradict the values of our Christian faith, we severely undermine our credibility as disciples of Jesus Christ. People can easily detect a lack of authenticity.


From the same mouth come blessing and cursing. My brethren, this ought not to be so. Does a spring pour forth from the same opening fresh water and brackish? . . . No more can salt water yield fresh (Js 3:10-12).

In All Things May God Be Glorified

Sadly, the name of God is constantly used in vain, in disrespect, and in outright blasphemy today. Worse yet, many of the people who frequently use God's name in vain also profess to be Christians. I've noticed that many Christians have a false understanding of what it means to use God's name "in vain." They often justify their misuse of God's name by saying, "Well, I didn't mean it," or "I was only joking." Such excuses are erroneous, because to do or say something "in vain" literally means "to no avail" or "without purpose." In other words, saying something in vain means that you didn't mean it. Any time you use God's name in a way that isn't deliberate, purposeful, or prayerful, you're using it in vain. The name of God should never be used as a means to the end of humor, and especially not in an expression of anger or frustration (e.g., saying "G.D."). Despite how common and seemingly harmless the expression "Oh my God"may be, this is also an abuse of God's name (outside of prayer). I even hear many Christians using the name of Jesus, our Lord and Savior, in a flippant or outright disrespectful way. In his letter to the Philippians, Saint Paul writes that "at the name of Jesus every knee should bow, in heaven and on earth and under the earth" (Php 2:10). Following this declaration, the practice among Catholics of bowing one's head at the name of Jesus, especially during the Mass, used to be a common devotion. Many people still do this, and when I first learned about it (a couple of years ago), I found it beautiful and appropriate and began doing it myself. This small devotion is a practical way to glorify God more in our speech, because it makes our use of His name more intentional and reverent. There is another simple and effective devotion that not only increases our respect for God in speech, but makes reparation for sins of blasphemy and profane language: The Divine Praises. The Divine Praises were originally composed by a Jesuit priest in the late 18th century. They are:

Think (and Speak!) About These Things

Our speech is NOT a morally neutral exercise of our tongue, but rather a reflection of who we are, an influence on who we become, a means of witnessing our faith to others, and above all, one of the primary ways in which we can glorify God as His beloved children. Recognizing this, we should strive and pray for purity in our speech and encourage this purity from everyone in our sphere of influence. Instead of allowing ourselves to be conformed to the childish, foolish, and impure ways of speaking that the world offers us as the "norm," we should take Jesus as our norm and allow His transforming grace into this most practical area of our lives. By doing this, we be more able to bear witness to our own dignity and the dignity of all people, impart grace to everyone we encounter, and glorify God in all that we do.

† Under the Mercy,
Chris Trummer